In 1943-44, Radhika Mohan Maitra played the Sur-Shringar with Ustad Sadiq Ali Khan on the Veen (north Indian Veena) at a private concert in Lucknow attended by some great musicians of that era. As a young Sarod player, Radhika Mohan felt the necessity for another instrument which could offer both the deep tonality of the Veen and Sur-Shringar as well as the faster Rabab style that was popular with the Sarodias. After some years of experimentation, he came up with a design and asked Gopal Sharma, the maker of his Sarod to create it. The essence of Sur-Shringar, Veen, Sur-Bahar, Dhrupad Rabab and Sarod was incorporated into the new instrument. Finally, in 1948 Thakur Jaidev Singh, the ace musician and musicologist and the then Chief Producer of All India Radio (AIR) named the instrument as Mohan Veena after its creator Radhika Mohan. He also recorded an interview of Pandit Maitra which was broadcast from AIR along with a recital on the Mohan Veena in the same year. 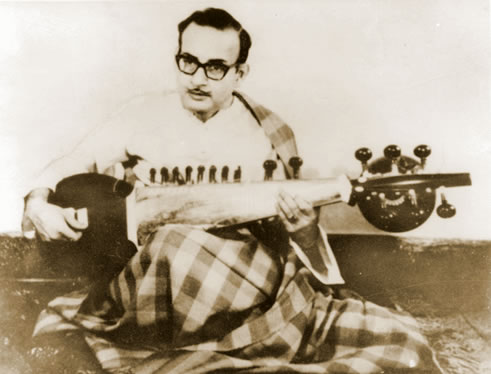 In this instrument the whole aspect of Sur-Rabab was minimized with a wooden top, replacing the skin covering of the Sarod and related instruments. Another version of the Mohan Veena was made by replacing the skin top of the Sarod with a wooden one. The gauge of the strings was also changed accordingly to cope with the flat bridge. The principle of the smaller flat bridge for the sympathetic strings was taken from the Sur-Bahar, and the numbers 11, 13 and 15 sympathetic strings were used.

Many AIR recordings of national programs played by Radhika Mohan were broadcast from all over India and the recordings of these recitals are the assets of AIR archives. On the eve of the 75th year of AIR, Radhika Mohan’s national program recital on the Mohan Veena (Ragas Mian Ki Malhar and Kedar) were broadcast. He was accompanied on the Tabla by both Ustad Keramatullah Khan and Pandit Prem Ballav.

In this audio clip you can hear Pt. Radhika Mohan Maitra playing Raga Darbari on the Mohan Veena.

In 1956, Radhika Mohan created this instrument with the inspiration from the Sur-Bahar, Dilruba and Sarod. This instrument has a straight bridge of bigger dimension but a look-alike of a Sarod bridge. The sympathetic strings pass under the main playing strings on the bridge. The main sound box is made out of wood, instead of gourd, as in the case of Sur-Bahar. The resonator on top is made of goatskin like a Sarod. This is a fretted instrument with a straight bridge where the plucked playing style of Sarod and Rabab can be incorporated. The instrument can be played with a Mizraf (Sitar pick) or a wire Jaba (Sarod plectrum). This instrument was also made for the first time by Gopal Sharma and Durga Charan Sharma.

In 1963, Radhika Mohan started experimenting eventuating in 1967 with an instrument called the Naba Deepa. The name was inspired by the name of Deepa Mukherjee, one of his favourite students.