One of the most famous Sarodias in the Shahjahanpur Gharana, Radhika Mohan Maitra was born to a noble family in Rajshahi, which is now in Bangladesh. The year was 1917 and India was still under British rule. His family, referred to as Zamindars or landowners, served under the British empire and helped collect local taxes from farmers. The Maitra family were also great patrons of music and art. His grandfather, Lalita Mohan Maitra, had commissioned the legendary Sarodia Ustad Mohammed Ameer Khan of the Shahjahanpur Gharana to come to Rajshahi and become his court musician. Lalita Mohan’s sons took up learning Sarod from Ustad Ameer Khan. Radhika Mohan’s mother played the Sitar and was a disciple of Ustad Enayet Khan, the father of the legendary Sitar maestro, Ustad Vilayet Khan of the Emdadkhani Gharana.

When Radhika Mohan was about five, Khansahib, as Ustad Ameer Khan was referred to, noticed the child’s keen interest in music and started to teach him. Thus began Radhika Mohan’s formal training in music, which continued for another twelve years until the death of the Ustad. 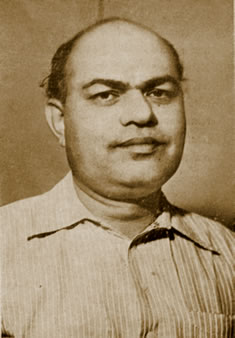 After the death of Ustad Ameer Khan, he turned to Ustad Mohammed Dabir Khan of Rampur, an exponent of the Senia Gharana, to receive extensive training in the Dhrupad-Dhamaar style of Indian Classical music. He developed his own style, blending the Rabab style of the Shahjahanpur Gharana with the Dhrupad vocal style from the Senia Gharana. With this training, Radhika Mohan created a unique style of his own, which was called the Senia-Shahjahanpur Gharana, combining the Rababiya style of Shahjahanpur, and the Gayaki style of Senia. 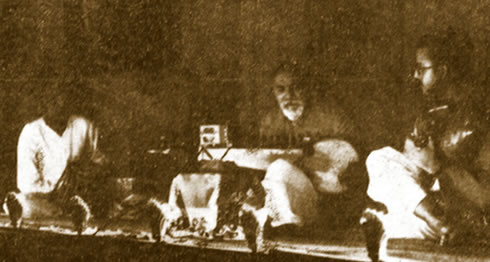 In the year 1937, Radhika Mohan performed at the Allahabad National Conference of Music with the legendary Sarod maestro, Baba Allauddin Khan.  During this course of time Baba also taught a few rare Ragas and Gats played in the Maihar Gharana to Radhika Mohan.

Throughout the country, audiences were mesmerized by the wonderfully melodious tone of his Sarod, his perfect pitch and taans and toras executed at lightning speed but with amazing control. He was a purist at heart; one who strongly believed that the true beauty of expression lay in maintaining the purity of the Ragas and of the compositions by famous Ustads. Through his consummate skill in handling the instrument, the fluent and brilliant phrasing and articulation of bol-taans (rhythmic patterns), he took the Sarod baaj or playing style to new frontiers. 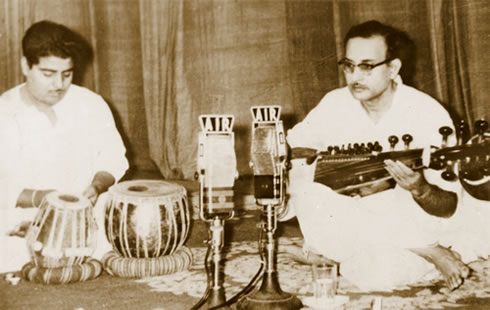 Along with the Independence of India from British Rule in the year 1947, also came the Partition of Bengal, one of the darkest chapters in modern Indian history, which saw mass riots between Hindus and Muslims and thousands of murders and rapes, as well as widespread plundering on both sides of the divided state.

At this time, Radhika Mohan was a professor of philosophy in Rajshahi College. His family decided to leave their ancestral home in Rajshahi and move to Calcutta. In Calcutta, Radhika Mohan was faced with an economic struggle for existence and having to think about earning a living to feed his family. He turned to teaching music, however, these were difficult times in which few people were interested in learning classical music. However, by this time his fame had already spread to other parts of the country and soon he was sharing the stage with other great musicians of his time such as Ustad Vilayet Khan, Pandit Ravi Shankar, Ustad Ali Akbar Khan, Ustad Amir Khan (vocalist) and Ustad Bade Ghulam Ali Khan. He also became a regular performer on All India Radio. 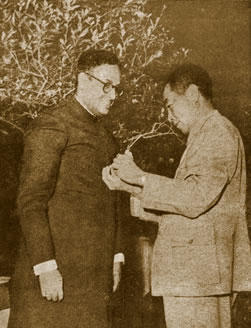 Radhika Mohan being felicitated by the Chinese Premiere Zhou-En-Lai during his visit to China in 1955.

His fame extended beyond the shores of India. He was part of a cultural delegation to the People’s Republic of China in 1955, Afghanistan in 1965, and Nepal in 1967. He also extensively toured Australia and New Zealand in 1962, performing in different cities.

In 1972 he was awarded the prestigious Sangeet Natak Academy Award by the government of India. 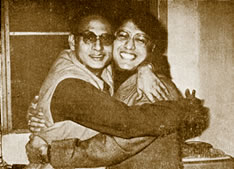 In 1972 he was awarded the prestigious Sangeet Natak Academy Award by the government of India.

As part of a visiting cultural delegation in 1962, Radhika Mohan is seen talking to the officials of the Elizabethan Theatre Trust in Sydney, Australia

As he entered the mid years of his life, he shifted focus from being a performer to a teacher. Ensuring that the legacy of the Shahjahanpur Gharana that had been created by legendary maestros continued, he was determined to pass on his knowledge to the generations to follow.

His labor of love bore fruit in several noted disciples, notable among them being Buddhadev Dasgupta, Anil Roy Chowdhury, Samarendra Sikdar, Rajani Kanta Chaturvedi, Pranab Naha, Dr. Kalyan Mukherjee, Narendranath Dhar, Joydeep Ghosh, and others. He had several students from overseas such as John Barlow, Michael Robbins, James Sadler Hamilton, to name a few. Interestingly, he had picked up a significant amount of the Emdadkhani style of playing the Sitar, first from his mother and later, through his friendship with Ustad Vilayet Khan. He taught a number of Sitar students such as Rajani Kanta Chaturvedi, Himadri Bagchi and Rabi Sen. Sitar maestro Pandit Nikhil Bannerji had also received training from him for a few years before going to learn from Baba Ustad Alauddin Khan. 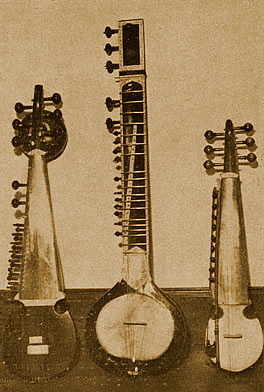 He composed some new Ragas, the most notable being Chandra Malhar, Dipa Kalyan and Alakananda. He also invented three new musical instruments – the Mohan Veena, Dil Bahar and Naba Deepa.

Radhika Mohan was uncompromising in his loyalty to the classical form and nothing could persuade him to pollute the purity of Ragas such as Darbari Kannada, Kaunshi Kanada or Hamveer Bilawal. At a time when other contemporaries dabbled in fusion or modern music that had more commercial value, he remained true to tradition. 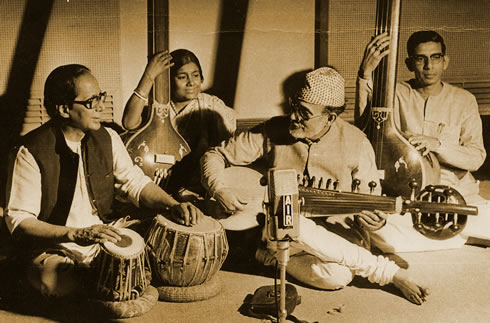 In his final recital for All India Radio, the maestro accompanied by Pt. Jnan Prakash Ghosh on the tabla, and flanked by his disciples, Samarendra Nath Sikdar and Dr. Sandhya Ghosh on the tanpuras

In the mid 1970’s, on his 60th birthday, he surprised friends and students by suddenly announcing the decision to retire from actively performing on the big stage and All India Radio (AIR) and Television. In his last National Program of Music broadcast, he performed with his close friend, the legendary Tabla maestro, Pandit Jnan Prakash Ghosh. In spite of being a Tabla maestro, Pandit Ghosh was not a graded musician for AIR and therefore, had not performed on the National Program before. Radhika Mohan wrote to the authorities saying that it was ridiculous that a great Tabla maestro like Pt. Ghosh would have to give an audition to get a Grade and added that he would only play in this program if Pt. Ghosh was given a grade and was allowed to accompany him. In time Pt. Ghosh’s grade arrived from Delhi and he performed with him.

Towards the late 1970’s the famous filmmaker Sir David Lean came to Calcutta and wanted to make a documentary on Radhika Mohan. Coming from an acclaimed director such as Lean, this was rare recognition for any Indian musician. The maestro was in his fading years of his life and undertaking this venture would have meant traveling and living outside India for a certain length of time. He politely refused the movie director’s offer, saying that if he left Calcutta, that would severely affect his students who were receiving regular training from him at that time.

In 1976 Radhika Mohan founded the Mohammed Ameer Khan School of Instrumental Music, which was dedicated to the development of young talent in Sarod and Sitar to carry the banner of the Shahjahanpur Gharana forward. He started the ‘Rising Talents’ music conference in 1977, which focused on providing opportunities to young and talented artists, irrespective of their Gharana or Guru, to perform in front of the music loving audience of Calcutta. This program became very popular and continued even after his death, till the mid nineties. Some of the most well known names in today’s Indian Classical music scene got an opportunity to perform on the big stage for the first time at the Rising Talents conference.

The maestro passed away after a brief illness in Calcutta in 1981 but his legacy lives on through his countless recordings and disciples.

In this audio clip you can hear an excerpt of Pandit Radhika Mohan Maitra playing Raga Bageshree on the Sarod, accompanied by Pandit Shankar Ghosh on the Tabla (courtesy Bihaan Music).

Below are some links of his recordings from YouTube.